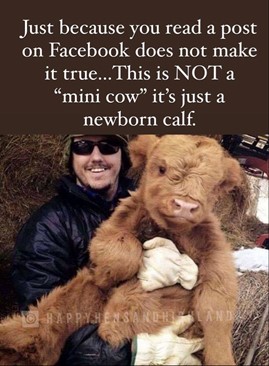 I obtained permission from Jaylyn Ettinger to share this article with those who contact me asking about miniature Highlands. I would like to add that there are some true miniature breeds if you are wanting a mini cow. Dexters are small, Herefords may carry the Chrondro gene and so be dwarfed, and Zebu tends to be a smaller breed. That would be a far better choice than a less than healthy Highland. I often find that those wanting a miniature breed also are intimidated by the horns on Highlands and because the horns are a breed characteristic, if horns seem threatening to you, please choose a breed that does not have horns.

After learning the truth about minis, if you are interested in a standard, well-bred Highland, please let me know!

There is no such thing as a miniature Highland, and certainly not a micro-miniature one. Adult Highland cows will average 1100-1400 lbs. Bulls generally range from 1500-2000 lbs. Not miniature.

Rising popularity of Highlands has brought out people trying to market smaller animals as “mini” Highlands, commanding high dollars for “pets.” Most often these are stunted, poor examples of the breed. There are many reasons for an animal to be on the small side. Maybe it is a case of placental insufficiency. Maybe the dam is older and her milk production/quality is declining. Maybe the calf was sick at some point. Maybe it has something congenital going on — bad heart, for example. Maybe the breeding combination just didn’t work — not every pairing clicks. Lots of different reasons.

Maybe the breeder deliberately withheld nutrition to stunt a calf. Some so-called “breeders” pull healthy calves off of healthy dams and feed the calves just enough to survive. Some misrepresent the age of the animal, claiming it is older than it actually is, so it seems small. I’ve heard of a few cases of people buying a very young calf as a miniature, with no instruction to feed milk replacer, and the calf is dead within a week.

Maybe the animal is not a purebred Highland, rather crossed with another breed — often Dexter. Crossbreeding is fine, as long as it is not being marketed as a purebred and the sire & dam do not carry the chondrodysplasia (dwarf) gene. Many so-called miniature Highlands are the result of a Highland being crossed with a chondro Dexter. Breeding animals that carry the chondro gene increases the risk of bulldog calves (a lethal genetic defect).

For any reason, other than being crossbred, it is irresponsible to pass on those genetics. Not only do you risk passing on poor qualities, you risk endangering the cow and future calves. A “mini” Highland cow will still have regular Highland size genetics – and will have a normal sized calf, greatly increasing the risk of dystocia.

I think (I hope) the problem is, most of these “breeders” do not have cattle experience and are just jumping on a bandwagon. Inexperience is fine, ignorance is not. Highlands have so much to offer as a hardy beef breed, why on earth would you bastardize a grand old breed to produce substandard animals? If you want a Highland, even if just for a pet, please buy a well-bred one from someone who has the breed’s best interest at heart.

Photos by permission of Emily Hopson at Happy Hens and Highlands.

We announce calves for sale through our newsletter email list. I don’t share that list with anyone, so you won’t get a ton of junk mail from it.